Hinduism’s Legacy examines the global contributions and impact that Hinduism has had on the world community. This resource highlights the gifts Hinduism has brought forth in the fields of non-violent social reform, mathematics, astronomy, media, politics, culture. This is a humble resource for learning and educating others about Hinduism. Please use the content - modify it and augment it – as you see fit. This is for purely educational and non-commercial purposes. The material is taken for various sources and, as far as possible, proper attribution is provided for the sake of its credibility.

Hinduism is truly a pluralistic tradition.

It is a world religion that reaches out to embrace other faiths with respect and honors the sincere beliefs of others without trying to convert them.

It is a religion but more so, a tradition – a way of righteous living.

The spiritual core of Hinduism is searching and understanding the mystery of consciousness and our being. But its social compacts continue to evolve.

No matter what path to spirituality, Hinduism teaches that we are all trying to get there like with a GPS – the shortest route may not be the quickest and may not be the most scenic! So the tolerance or mutual respect of other traditions is a very important message of Hinduism.

The earliest seats of learning were in India. Scholars travelled from all over the world (Greece, China, Persia, etc.) to study.

Science and Hinduism were never at odds! This tradition continues in modern India.

Mahabharata is one of the two greatest Hindu Epics.

Mahatma Gandhi was a Hindu who used non-violent civil disobedience, as inspired by Hindu teachings, to throw out the yoke of British rule on India.

Today, oppressed people in different parts of the world use Gandhi’s teachings on non-violence in their struggle for social justice.

Discussion question: How did non-violence achieve the goals of these three men?

Gandhi ji (“ji” signifies respect) has inspired many service organizations all over the world.

“In an age in which violence and peace faced each other more fatefully than ever before, Gandhi's name became, in the middle of our century, the counterpoise to those of Stalin and Hitler.

The achievement for which the world credited this man (who weighed less than a hundred pounds and whose worldly possessions when he died were worth less than two dollars) was the British withdrawal from India in peace.... And he renamed India's untouchables (shudras) ‘God's people’ (harijan)...

Gandhi's own inspiration and strategy are summarized in his autobiography:

‘Such power as I possess for working in the political field has derived from my experiments in the spiritual field. In the spiritual field, truth is the sovereign principle, and the Bhagavad-Gita (described under Scriptures) is the book par excellence for the knowledge of Truth.’” 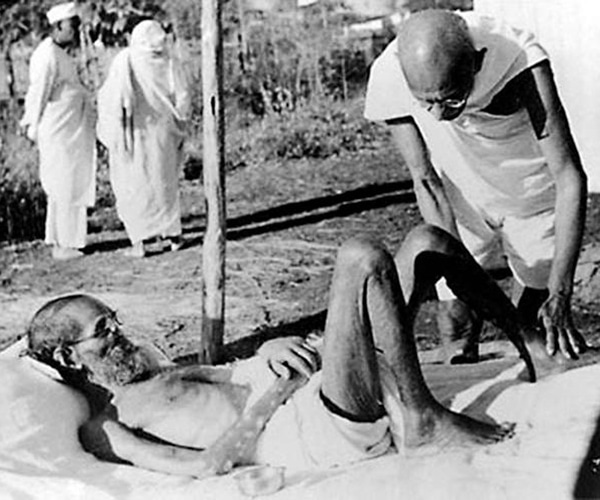 A midwife tends a pregnant woman in a remote part of Maharashtra state. Mobile clinics, started in 2013 by Gandhi’s Sevagram ashram, honor his commitment to rural health needs.

India's Fertile Ground for Other Faiths

Jainism goes back to nearly 950 years before Christ. There are many followers of Jainism in India and there are many common beliefs with Hinduism such a dharma, karma, reincarnation and moksha/nirvana.

Sikhism spread through Southeast Asia. Most Sikhs live in the Indian state of Punjab.

Most of the followers of Jainism and Sikhism live in India.

Buddhism. Siddharth Gautama, born in a Hindu king family nearly 600 years before Christ, received enlightenment after meditating under a tree for 19 years in northeastern India and became a Buddha. He led reforms, such as elimination of animal sacrifices in temples, that were being misinterpreted in Hinduism and those practices have disappeared. Therefore, Hindus consider Buddha as a Reformer and the ninth avatar of Vishnu.

Hindu Kings like Asoka, who have converted to Buddhism, sent missionaries to Southeast Asia to spread Buddhism. To China, Korea and Japan, Buddhism spread as shown below.

Research Question: Research one of the spiritual traditions and Hinduism. How are they similar? How do they differ?

Born in a Hindu king family nearly 600 years before Christ. Led reforms, such as elimination of animal sacrifices in temples.

A non-theist: never denied God nor acknowledged God. His message:

“I do not care to know your various theories about God. Do good and be good, and this will take you to freedom and whatever truth there is.”

“Every morning we are born again. What we do today is what matters most.” -Siddhartha Gautama 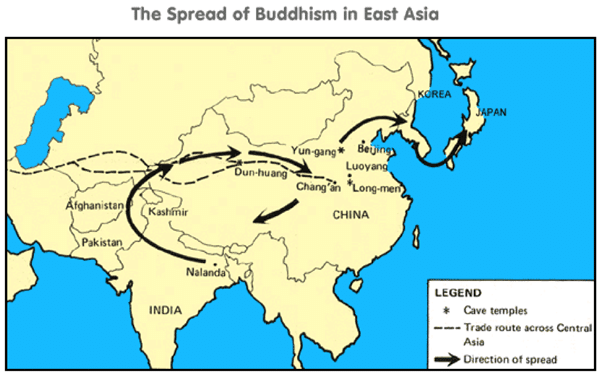 No Room for Arrogance

“We all reside on a small planet orbiting a single, middle-aged star that is one of some 200 billion stars in the great swirl of matter that makes up the Milky Way galaxy. Our galaxy is but one of an estimated several hundred billion such structures in the observable (emphasis added) universe - a volume that now stretches in all directions from us for more than 270,000,000,000,000,000,000,000 miles.” Astrophysicist Caleb Scharf, Columbia University

There may be parallel universes! If so, how is it possible to comprehend the nature of the cosmos, let alone the Infinite?

No one has had breakfast with the Infinite face-to-face! No Hindu should be arrogant!

Each Hindu should be inherently ecological. Any time we are doing something that is not ecological, we are insulting our own mother.

Many Hindus believe that getting out of bed in the morning, they are by necessity putting their foot on the chest of their own mother.

Many touch the ground with their forehead as a sign of respect, as one might see the Pope do when he lands in a foreign country.

Discovery that roots occur in pairs: solution of quadratic equations

Advances in Trigonometry: Use of ‘Sine’

It’s the oldest such four-by-four square although there are earlier three-by-three squares from China and Persia. Perhaps ancient Hindus and Jains thought that numbers held great powers that they hoped to harness.

Numbers in each row & each column and the numbers in the main and secondary diagonals, all equal 34. Also, the sums of all two-by-two squares at the four corners of the large square and the sum of the central two-by-two square equal 34. Source: Why Science Does Not Disprove God by Amir Aczel. 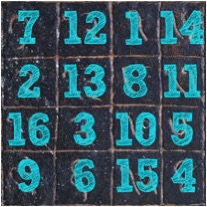 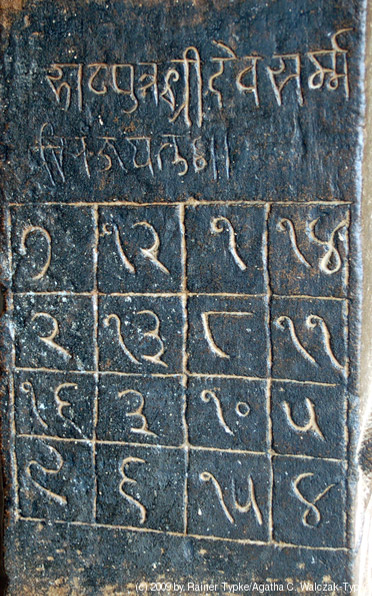 More than 1,000 years before Copernicus and Galileo, Aryabhata discovered that the earth revolves around the sun!

A. Hinduism: A Primer

B. The Practice of Hinduism